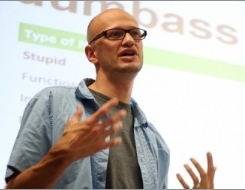 What is the Founder Institute and how did everything start?

When I was running TheFunded.com in 2008, I analyzed a ton of data that we had collected from the over 16,000 founder and CEO members of the site.

From that data, I could intelligently estimate that of the roughly 25,000 companies being launched every year, over half of them were failing right away without making any meaningful progress, and less than 20 were having a significant impact.

I believe that startups are the economic engine that create jobs, spur innovation, and ultimately advance the human condition, so this seemed like a worthy problem to address.

So, I launched the Founder Institute with a goal to inverse the startup success rate and launch 1,000 meaningful and enduring companies per year.

The Founder Institute now operates in 42 cities across the globe. We are an early-stage startup accelerator that takes the entrepreneur at the very beginning of the process when mistakes are most deadly – the idea stage – and provides them with expert training, a structure company-building curriculum, and feedback from experienced founders and CEOs, in order to increase their chances of success.

What is his vision and mission?

Our vision is to launch 1,000 meaningful and enduring technology companies per year, and by 2020 we want our companies to be creating over 25,000 new jobs per year.

Most incubators and accelerators have copied the Y Combinator or TechStars model, where they look for a team of people that are in the process of creating a product, and give them about $18,000 ($6000 per founder) to fully focus on the product for three months, in exchange for 6-10% equity. We are different in a number of different ways;

What’s the difference between the Founder Institute program and an entrepreneurship program from a well-known business school, university, a business accelerator/incubator or any other entrepreneurial initiative?

The Founder Institute is different from business schools because our curriculum is designed for you to learn by doing, with company-building assignments that get you closer to a product launch every step of the way. This is not theory taught by professors.

This is practical training, advice, and feedback from successful entrepreneurs and CEOs who have been there and done that.

You don’t graduate from the Founder Institute with a degree – you graduate with a company built for success, and with the skills necessary to be a technology entrepreneur.

The Founder Institute gives Barcelona entrepreneurs a structured, company-building curriculum that leverages the best practices of Silicon Valley, and creates a collaborative environment engineered to resemble Silicon Valley as well.

At what stage of expansion is the Founder Institute right now?

As of today we are in 42 cities across 5 continents, and have graduated over 800 companies. We just turned four years old, and are scaling up for more aggressive growth. Things are just getting started.

What plans do you have for the future and for Barcelona and Spain in general?

With chapters now in Madrid and Barcelona operating twice per year, I expect the Founder Institute to launch over 60 new companies per year in Spain, and create many, many new jobs.

We expect that the performance of these startups will rival Graduates from around the world, and become the cornerstone of the local startup ecosystem.

Eventually, a large portion of the most successful technology companies in Spain will have been launched from the Institute program.

I know that Barcelona is a nascent startup ecosystem that has the potential to grow into a startup hub. As a center of art, culture, and creativity, I believe Barcelona has a bright future for technical innovation.

Also, while I know that much has been written about the lack of venture capital in Barcelona, I truly believe that money follows talent. We are trying to help the talent in Barcelona realize its potential.

How has been the experience so far in Barcelona?

The first Barcelona chapter was well received, with very, very high demand. It was actually one of the easiest new chapter launches we have ever had, and we graduated the first class of seven promising companies just last month. Now, with applications open for the second semester, we are seeing similar demand.

I mentored at the Barcelona chapter for two of the training sessions last semester. The Barcelona founders definitely leaned towards to B2C companies, but I acknowledge that it is a small sample size. We will see what the Summer 2013 class looks like.

We have received much support in Spain, especially from partners like Moritz and Auren, who are all devoting resources to help entrepreneurs in Spain succeed.

It’s very hard to judge a new founder by the quality of their idea, because there is too much subjectivity involved.

After all, even the best venture capitalists are wrong the vast majority of the time, and they work with entrepreneurs at a much later stage then we do.

So, at the Founder Institute, we focus on the person. To apply to the program, you don’t even need an idea. Instead, we use a proprietary Predictive Admissions Test to find the best people.

This social science test was developed along with leading university social scientists over the last 5 years, and is regularly calibrated to identify entrepreneurial personality traits and remove all forms of subjective bias.

It takes about an hour to complete, and includes a battery of personality and aptitude tests. Data from the test itself, hundreds of evaluations in the program, and progress evaluations after the program, are all fed into our analytics to find the traits that make successful entrepreneurs.

What are these attributes of a successful entrepreneur?

You’ll notice that IQ is not included, and neither is conscientiousness. We have not found any correlation with these traits.

Conversely, there are negative traits that we screen for as well. These include predatory aggressiveness, excuse-making, deceit, emotional instability, and narcissism.

How precise is the correlation between the results of the test and the success of projects launched by Founder Institute graduates?

85.1% of our founders perform at ratings at or above their Predictive Founder Score in the program and can be considered «successful early-stage entrepreneurs».

We define «successful early-stage entrepreneurs» by their ability to quickly execute the strategy and short-term goals they defined in the FI program, that were validated by their Mentors and peers.

Depending on their specific business and goals, metrics such as revenue, adoption, profitability, capital raised, recruitment of top talent, product milestones achieved, and more can all be factored into determining their relative level of success.

In total, 91 % of Founder Institute graduate companies are alive, while just 9% of the companies have gone bankrupt.

According to the latest study of Startup Genome (Nov. 2012) no Spanish city appears among the 20 cities in the world with the best scenarios for enterprise projects.

It all starts with community. A big reason why Silicon Valley is a hotbed for innovation is the collaborative culture here.

All the startup people here know eachother, they get coffee at the same cafes, and they go to the same events.

They share metrics, best practices, and their ideas, because in the end they know that ideas don’t mean anything – execution does.

It is a very rare culture, but the Founder Institute tries to recreate this collaborative environment in the markets where we operate through our shared Graduate Liquidity Pool.

For example, the talent and value made from PayPal is playing a central role in almost every meaningful company coming out of Silicon Valley.

Governments need to create incentives for people to launch companies in Barcelona, and form other programs to provide those companies the services they need – for the long term. I emphasize “for the long term”, because this is not a quick fix.

It takes a long time for these clusters of innovation to take hold, and returns may not be seen for many, many years.

This makes it very challenging for local governments to support such initiatives, but I believe District 22@ is a great start.

Any cookies that may not be particularly necessary for the website to function and is used specifically to collect user personal data via analytics, ads, other embedded contents are termed as non-necessary cookies. It is mandatory to procure user consent prior to running these cookies on your website.